One of the more fun bits of hardware I have acquired in the last couple of years is the NodeMCU development board. 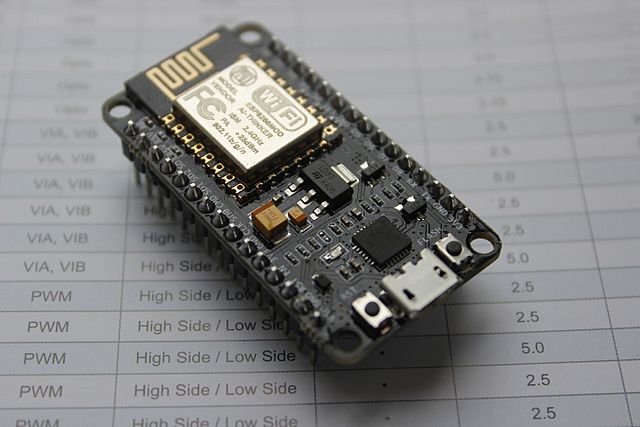 This little board contains the Espressif ESP8266 WiFi-enabled microcontroller which packs a punch: a 32bit RISC processor clocked at up to 160MHz, on board WiFi, very power-efficient “deep sleep” modes, and the NodeMCU board adds power management, 4MB flash, and some odds and ends without increasing the footprint much beyond a small Arduino. The best thing is that your local store will have it for around $5 and if you source if from China for around a dollar and change. I’m a big fan of Elixir and especially Nerves, but I’m also Dutch and therefore a cheapskate - I’ll use a cheaper part if I can and the ESP8266 displaces a lot of stuff where years ago, you would only have considered a Raspberry Pi.

NodeMCU is a development board and an SDK, and the SDK is in one of my favorite little languages, Lua. Lua was made for embedding, it is hugely popular in a lot of industries, and rightfully so - the whole official language and run-time environment weigh in at ~20k lines of C and ~10k lines of Lua code, there are multiple highly compatible implementations to choose from (including Luerl which implements Lua from scratch in Erlang), and given its size, it is not hard to run it on really small machines, like the ESP8266. NodeMCU also comes with excellent documentation and a library containing all the things you will need for your embedded project.

So why am I writing about this? We have chickens. That’s why.

Chickens are awesome creatures. They hatch and then they come preprogrammed with everything they need to know to survive - we know, because we got ours as day-olds and we certainly did not teach them how to swallow a young frog whole. We let ours free roam and being excitable and curious creatures they often forget to check back into the coop in time. So they enter a dark coop around dusk, cannot see the roost, and then sleep somewhere else with the risk of being pooped on by the ones that did make it back in time. Every night, we check them on the coop cam (a Wyze 2, never owned a very small cube that runs Linux and talks to me before), notice it happened again, get up, and rectify the situation manually.

Therefore, what’s needed is some extra light around dusk.

The simplest definition of “dusk” is “when it gets darker”, and I started hooking up a photoresistor to the dev board’s A/D converter, which worked fine, but then I thought about how to calculate, with certainty, that it gets darker because of dusk and not because of a thunderstorm. Yes, I could have just pivoted and turned the “dusk light” into a “it is getting somewhat dark for any ol’ reason” light, but I was not ready to do that yet. Therefore, I needed a way to know what time it was, probably. I said that NodeMCU comes with a rich standard library so I was very happy to find the sntp module, a simple NTP client.

Hmm… so if I know, from NTP, what date it is can’t I just calculate dusk instead of relying on a photoresistor? Less hardware, more software, just up my alley. Not a lot of stuff from Lua land came up, but Wikipedia has an entry on the Sunrise Equation that felt like something I could translate into Lua. So, I started out with a test:

Note the string compares - pure laziness, because lunit does not have something to compare floats with a delta and I was not going to let me be sidetracked in finding something else/better or even writing a small test framework from scratch. The code was a relatively simple transcription from Wikipedia, with some thinking over where to put degree-to-radian conversions as Wikipedia worked in degrees but most math libraries want, for good reasons, radians. It disagreed with the National Research Council of Canada’s calculations by one or two minutes, which could simply be because of altitude corrections. I decided that for my application, this was immaterial so I manually verified the calculated results and punched them back into the test assertions as a future safety net, hence the very precise numbers the test uses to compare.

Without further ado, I landed on this:

Note that this works with Julian dates which I think is a concept that deserves more attention in the software world. Given that the POSIX timestamp and the Julian date are both offsets from a given epoch, the conversion is trivial:

Where the 2440587.5 represents the difference between 1970 and 4713BC. One odd thing happened with my code which was a headscratcher until I realized that the Julian epoch starts at noon (UTC) and not midnight, and that cost me a lot of time. I could not understand why the outcomes where half a day off :).

I wrote the code and tests on my Linux box, but the same code worked on the ESP8266 once I rebuilt the firmware with two options:

Once that was done, everything worked fine. I now had a microcontroller that could, theoretically, ask the Net for the exact date and calculate sunset from there. My first computer was a TRS-80 so yeah, mind blown.

NodeMCU’s “Node” comes from its borrowing Node’s concurrency model, heavily relying on callbacks. I really do not like that programming model, because you invariably end up mixing up concurrency and business level code, but for this it worked just perfectly. We boot, some housekeeping is done (like attaching to WiFi), and then we ask what time it is:

gpios_off switches off the LEDs (we’ll get to the hardware later). The sntp module has a sync command that does two things: it sets the time in the ESP8266’s RTC (so that subsequent calls to the rtctime module give the right answer) and it calls a callback function with some info on the NTP response (the error callback I pass in just reboots the MCU). The callback then calculates sunset, calculates the time that the lamp should be on (I put that half an hour before sunset), and depending on whether we’re in the lamp on interval or not, does the right thing. The whole thing is in Github so I’m not going to copy/paste, but for example if the lamp needs to be switched on, then this gets called:

Like most functions there, it ends up doing something and then setting up a timer with a callback to do the next thing. As far as state machines with delays go, I found it a very clean and simple to reason about way to write code, and it was pretty much one of the first times that the callback model for multithreading looked like it found its sweet spot. The state machine breaks down in four functions that do something and then call or schedule each other.

You would expect me to write something about testing now. I should. I won’t. But it’d be extremely trivial in Lua to have dummy implementations of tmr and sntp and friends. Instead, I decided that there are just a couple of use cases, it was around dusk anyway, so I just rebooted the MCU at set times to see whether it made the right decisions. It did :). Time for hardware. 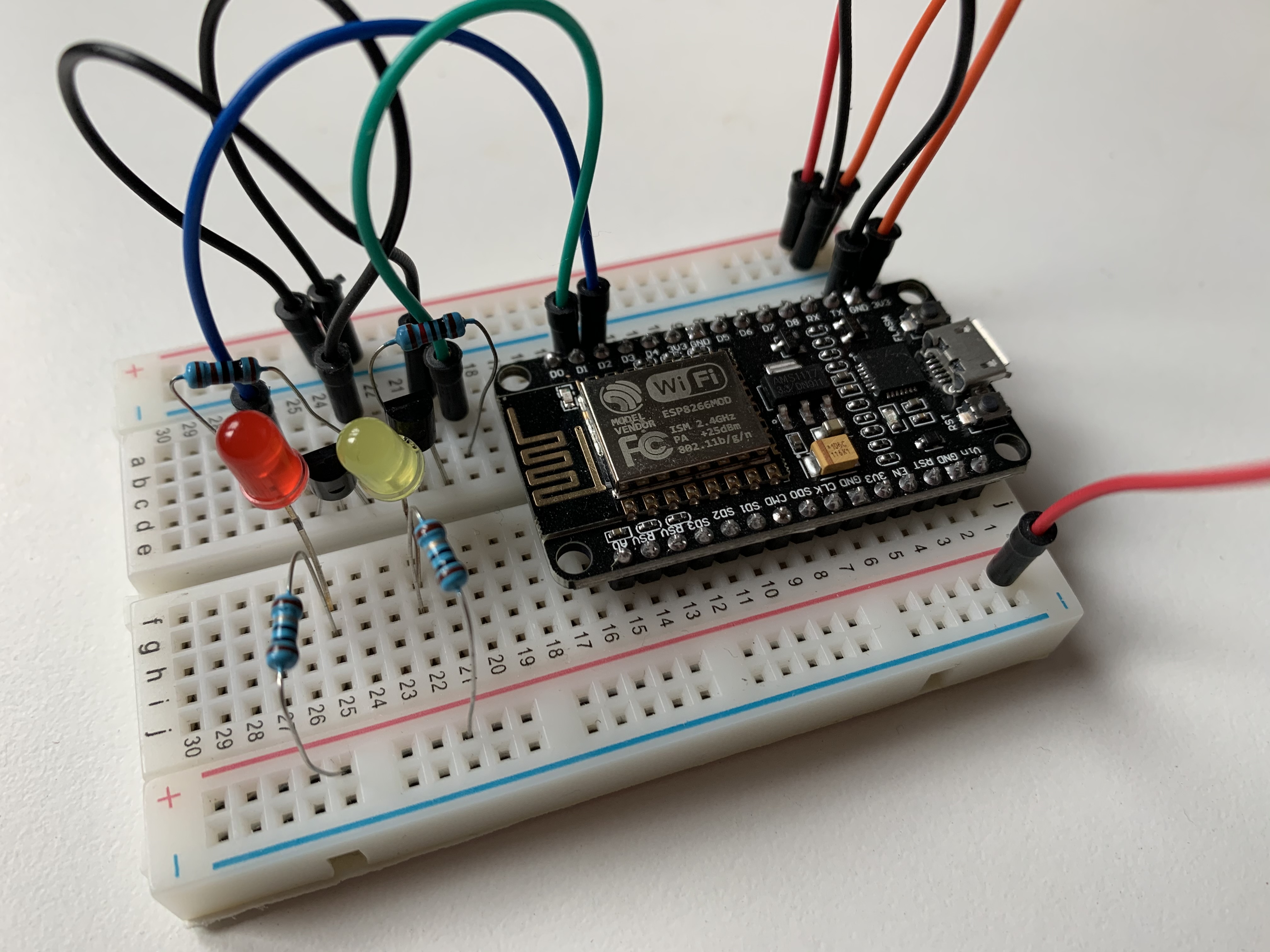 Breadboard first, of course. While the target hardware uses left over LED strips, these take 12V so I verified that things worked using regular LEDs. The transistors (I used 2N3904 for the very good reason that I had them) are triggered through two GPIO pins with a 1KΩ resistor as a current limiter between GPIO and base, and the LEDs are between 5V and the transistors’ collectors. The emitters are wired to ground. Needless to say, this is 101 electronics, if it even makes that bar and everything just worked. Still, had to verify with the blinkenlights, not?

Why two transistors, I hear you ask. Well, I only had low power transistors and the end result would use a 12V LED strip that was left over; it has six LEDs on it and on measuring it on my bench power supply, it drew 50mA. 50mA times 13.6V is 680mW which is higher than the transistor’s 625mW max power dissipation. Instead of calculating and measuring more to see how much the transistor would actually dissipate, I decided to use the LED strip’s hint and cut it in half (these strips have a cut mark every three LEDs) and just trigger two GPIOs. Shorter strips are simpler to work with anyway. For those that, like me, are not electronics wizzards, the schematic:

and, for a good laugh, the end result, mounted dustproof in an old pickle jar: 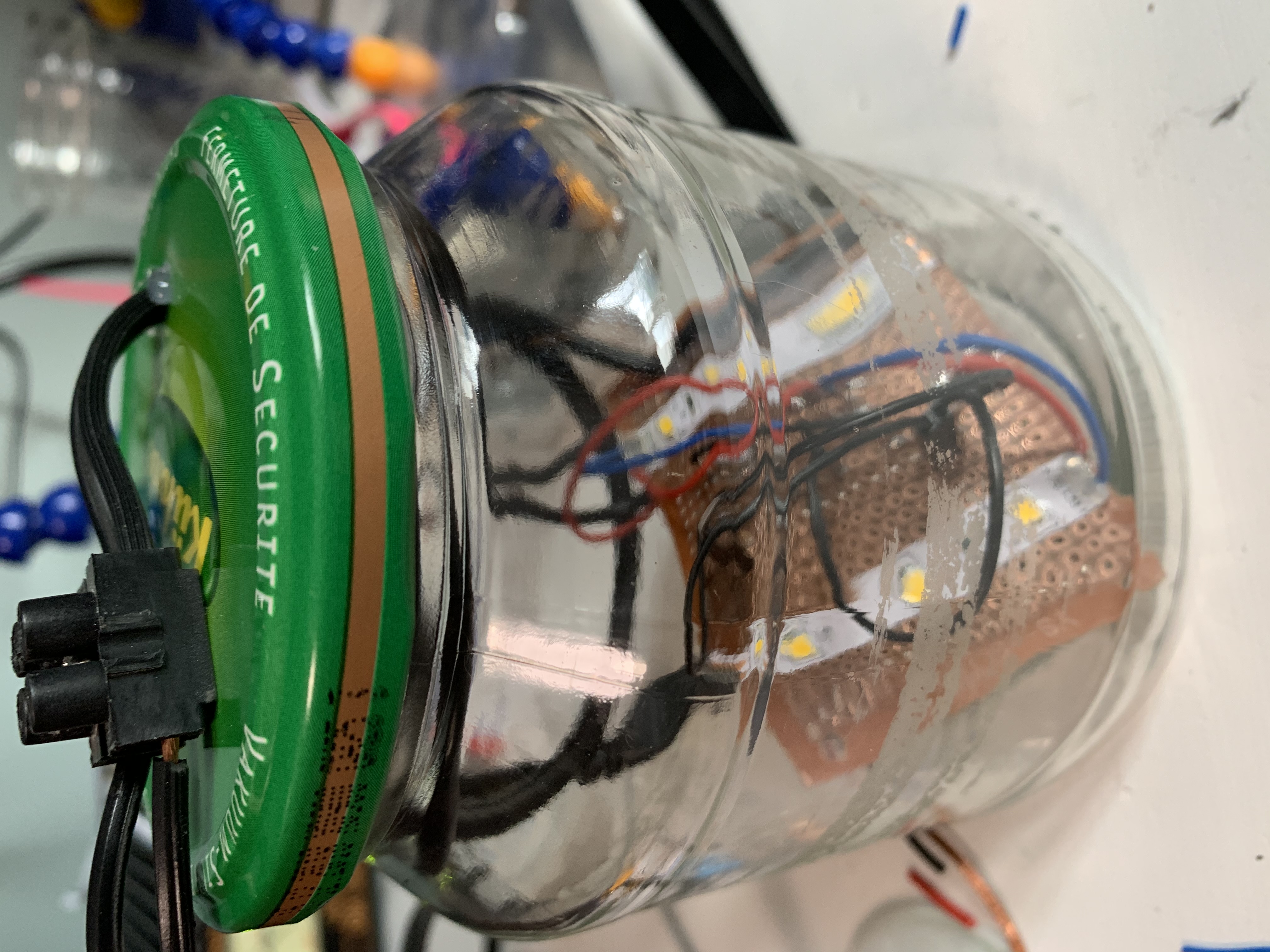 The jar is dustproof, fireproof, and transparent so it is the perfect enclosure for a chicken coop. The jar is fed by 12V from a solar+battery combination, and I added a DC-DC voltage regulator; I once bought a handful of these; they are based on an LM259 switching regulator and they’ll eat anything up to 40V and spit out whatever you need. The LEDs get the 12V directly and the NodeMCU receives 5V through its USB port (I could have soldered the 5V directly on the NodeMCU but this way the device either gets 5V or is connected to my laptop, never both at the same time which I think is safer). Next up is install in the coop, as soon as the snow stops :). Because it is in the coop, and I never trust my code, I added remote logging as well so that a PC that is always on now shows exactly what is happening in its /var/log/syslog:

I hope I got your attention for this wonderful and cheap IoT device and development environment. The whole build took me maybe two days, and for much less than a Raspbery Pi I now have something that does the trick, is network connected, easy to upgrade (although not yet over-the-air), and will tell me what it is doing through syslog to a PC that is always on and has remote logging enabled. Using ESPlorer development is highly interactive and Lua seems to me like a language tailor-made for this kind of device.

Also, I hope you had fun reading this, of course :)

Code can be had from Github.